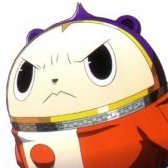 Estate Agents - or - A Good Case For Eugenics.